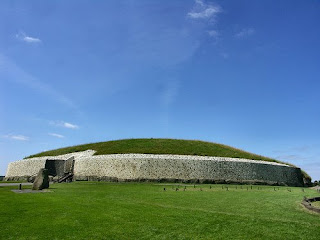 The Irish node of IYA2009 are offering to share with IYA2009 Worldwide a live webcast from the neolithic passage tomb of Newgrange, in County Meath, Ireland, of the winter solstice sunrise on December 21st. This event is organised and sponsored (for IYA2009), by the Office of Public Works in Ireland. This will be the first of many IYA2009 events.
See http://www.newgrange.com/, http://astronomy2009.ie/

Newgrange is an extremely well-preserved and very large neolithic monument dating from about 5000 years ago, dated from both the archaeological and astronomical evidence. A corballed inner chamber within the mound, with many beautiful decorated stones, lies at the end of an 18m downwards sloping tunnel. On each winter solstice for the past 5000 years the first rays of the rising Sun would have passed through a specially constructed aperture (the roof box) above the entrance. Today these rays fall on the floor of the inner chamber at the foot of a decorated stone, but 5000 years ago the actual stone would have been illuminated. Newgrange is the oldest neolithic monument in the World with a known astronomical function, and it predates the better-known Stonehenge in the neighbouring island of Great Britain by more than a thousand years.

When Newgrange was built neolithic astronomers set out the dimensions and positions of the various components, (of the roof box, passage, inner chamber etc.), before the mound was built, with extraordinary precision. Angles are correctly defined to within a small fraction of a degree. The archaeologists talk (fancifully I think) about various ritual functions, and certainly the recent complete excavation showed that the inner chamber was the repository of cremated human remains. They speculate that the Sun's rays at midwinter sunrise served to connect the Worlds of the living and the dead, but I prefer to think of it as an astronomical observatory, which it certainly was, built to determine the end of the old year and the start of the new one.

At some unknown time in the past the passage was blocked and the function of the observatory lost - although, strangely, local folklore tells of the midwinter sunrise entering the mound. It was rediscovered when the mound was excavated in the 1960s and since that time a small number of observers have been in the chamber each year to observe the event. I was there a few years ago and it is very moving experience - one can not help but think of our remote ancestors ~250 generations ago doing the same thing.

This will actually be the first event which is specifically to do with IYA2009, although the formal launches of IYA2009 and the Irish Programme for IYA2009 will be in early January. Of course the winter solstice is a few days early, but maybe one could argue instead that the calendar year starts a few days late - certainly midwinter marks the start of the Solar year. To whet your appetite I am attaching an image taken just after sunrise, courtesy of the Office of Public Works, Ireland. You may use this picture, but please include the proper accreditation.